Posted at 15:35h in Alerts by Alert team

South Carolina and North Carolina coastal areas are likely to catch the brunt of Dorian’s impact on the Southeast late Wednesday through Thursday. Hurricane Dorian gradually leaves Florida behind Wednesday, setting its sights on the coasts of Georgia and then the Carolinas. These areas face a triple threat of “destructive winds, flooding rains, and life-threatening storm surges,” according to the National Hurricane Center.

While Dorian has stayed far enough off the coast to largely spare Florida from the worst of its wrath, it is forecast to make a much closer approach to the coastline of the Carolinas between late Wednesday and Thursday and could even make landfall. Impacts are thus expected to be more severe.

Cocoa Beach, Fla. is usually full of tourists at this time of year, but Hurricane Dorian has turned it into a ghost town. (Ray Whitehouse, Jorge Ribas/The Washington Post)

Around Charleston, S.C., for example, wind gusts could hit 80 mph, and water levels could rank among the top five levels ever recorded due to the combination of ocean surge and up to 15 inches of rain. Higher wind gusts could lash North Carolina’s Outer Banks, leading to power outages and damage.

Even the Virginia Tidewater and southern Delmarva Peninsula could endure tropical storm conditions by Friday, after which the storm is expected to finally zoom away to the northeast. The Category 2 storm, while no longer the powerhouse that devastated the northwestern Bahamas, has expanded in size. That means its strong winds cover a larger area, capable of generating giant waves and pushing large amounts of water toward the shore. There were signs that Dorian is attempting to intensify over the waters northeast of Florida on Wednesday morning, with a ring of thunderstorms building up around its center. If this trend continues, it could mean even worse impacts for the Carolinas.

Coastal flooding is also a risk from northeastern Florida to the North Carolina Outer Banks, where water levels may rise up to seven feet above normally dry land, prompting storm-surge warnings.

As of 11 a.m. on Wednesday, the storm was 90 miles east-northeast of Daytona Beach, Fla., and moving north-northwest at 9 mph. The storm’s peak sustained winds were 105 mph, making it a high-end Category 2 storm. Dorian is expected to maintain its current intensity through Thursday.

Radar showed Dorian’s outer rain bands grazing the coast from Titusville, Fla. north to near Savannah, Ga. During the predawn hours Wednesday, peak wind gusts reached 50 to 70 mph in Volusia and Brevard counties in Florida and the Hurricane Center said tropical storm conditions were continuing to affect portions of the coast of northeast Florida Wednesday morning

“Remain cautious of strong wind gusts and brief bursts of heavy rain in passing squalls today,” the National Weather Service in Melbourne, Fla., tweeted. “Conditions at beaches are hazardous from #Dorian. The surf remains high and rough, along with a threat of coastal flooding & beach erosion.”

The National Weather Service in Jacksonville also warned of dangerous conditions at the coast due to elevated water levels anticipated at the 1 p.m. high tide. Scenes from social media showed water running up to homes in Vilano Beach, just north of St. Augustine:

The waves are reaching the sea wall in Vilano Beach. High tide is around 1pm. Couple that with storm surge and we’ll most likely see significant erosion.

Forecast for Georgia, the Carolinas and Virginia

Conditions are expected to gradually deteriorate Wednesday in coastal Georgia and late Wednesday in South Carolina – although rising water levels due to surge were expected sooner. In North Carolina, it may take until the second half of Thursday for tropical storm conditions to commence. Most of the storm effects in southeastern Virginia should hold off until Friday morning.

The severity of Dorian’s effects will be closely related to how closely Dorian tracks to the coast and whether it makes landfall. Most computer models now forecast the center of Dorian to come very close to the coast of South Carolina and to come ashore in North Carolina, with the highest chance over the Outer Banks. Computer models generally project that the storm center should remain far enough off the coast of Georgia to limit winds to tropical-storm force (39 to 73 mph) and rainfall totals to 3 to 6 inches. Tropical storm warnings are in effect here.

In the Carolinas, under a hurricane warning, sustained winds could reach 60 to 80 mph with higher gusts, especially along the North Carolina Outer Banks. Rainfall amounts of 5 to 10 inches are predicted, and localized totals up to 15 inches, meaning a high risk of flash flooding.

The Georgia and South Carolina coastlines are particularly vulnerable to storm surge flooding, even from a storm that does not make landfall, due to the shape of the land on and just offshore, as well as the effects of sea-level rise and land subsidence over time. The surge could reach 3 to 5 feet in Georgia and 5 to 8 feet from the Isle of Palms to Myrtle Beach, South Carolina. From Cape Lookout to Duck, North Carolina, including Pamlico and Albemarle Sounds and the Neuse and Pamlico Rivers. a surge of 4 to 6 ft is anticipated.

Farther north, the possibility of a 2-to-4-foot surge exists in Hampton Roads, Va.

Here’s the latest #Dorian storm surge forecast from this morning. The water could reach the following heights above ground somewhere in the indicated areas if the peak surge occurs at the time of high tide. For more details see http://hurricanes.gov 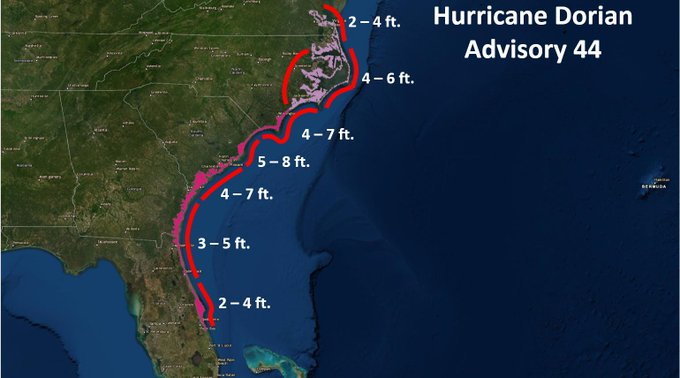 The Weather Service forecast office in Charleston, S.C., is forecasting that storm-surge flooding may begin to occur there on Wednesday, well ahead of the storm’s center of circulation. Heavy rains of 6 to 10 inches or more could worsen the surge-related flooding by impeding drainage back out to sea.

The @NWSWPC has issued a High Risk area for flash flooding over eastern South Carolina & SE North Carolina for Thursday due to #Dorian. Very heavy rainfall totals of up 15 inches are possible. For more details see http://hurricanes.gov  or https://www.wpc.ncep.noaa.gov/#page=ero 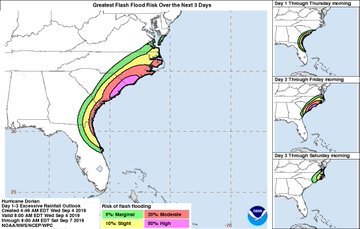 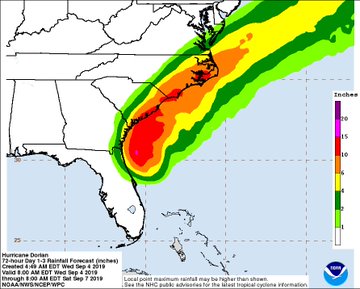 “The combination of significant storm surge inundation and heavy rainfall will enhance the risk for flash flooding, especially along coast, including Downtown Charleston, portions of the Savannah Metro Area, and the nearby coastal communities,” the Weather Service office in Charleston wrote. “This is a dangerous situation and preparations should be rushed to completion today.”

Depending on the timing of the maximum storm surge, Charleston could see this storm bring one of its top five water levels on record.

Fort Pulaski, Georgia, near Savannah, is forecast to have coastal flooding at midday Wednesday that would be exceeded only by Hurricanes Matthew and Irma, while Charleston may see a 2nd-worst flood event, behind 1989′s Hurricane Hugo, on Wednesday night.

The center of #Dorian may still be off the FL coast, but impactful coastal #flooding at high tides today/tonight in GA/SC. 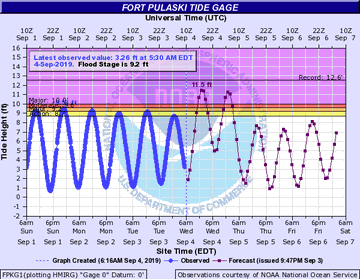 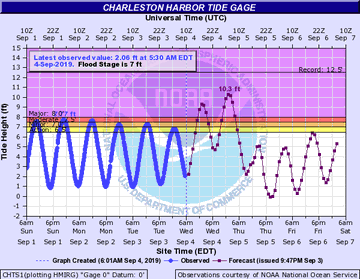 According to the Weather Service office in Charleston, based on the present forecast track, the result could be particularly severe. Among the possible effects, it listed: “Large areas of deep inundation with storm surge flooding accentuated by battering waves. Structural damage to buildings, with several washing away. Damage compounded by floating debris. Locations may be uninhabitable for an extended period.”

Locations farther north from Virginia Beach to the Delmarva could get clipped by the storm Friday and Saturday, with heavy rains, tropical storm force winds and coastal flooding.

A tropical storm watch is in effect from the North Carolina/Virginia border to Chincoteague, including the Virginia Beach area, as well as the Chesapeake Bay from Smith Point southward. Up to 3 to 6 inches of rain could fall.

“The risk of wind and rain impacts along portions of the Virginia coast and the southern Chesapeake Bay are increasing,” the Hurricane Center wrote. “Residents in these areas should continue to monitor the progress of Dorian.”